Introducing a range of alternative, superior wines that reveal the mysteries of nature and perform a celebratory dance for the senses.
The magic of a wine range that can hold its own against the best brands in the world – in taste, texture, aroma and colour.

It was after a meeting of minds between the creator, Carl van Wijck and his Belgian friends, that the first wine-making steps were planned – securing land and capital. The marriage between a dream and commercial reality required counter-intuitive thinking and extraordinary courage and faith from the Belgian partners. All wines can claim their own uniqueness. Olivedale Wines adhere to human prescriptions, but allow nature to prescribe as much as possible. They are not only natural wines. They are wines from nature!

Rocks surrounded by cobbles of different sizes formed, and were discovered years later by Farm Manager, Adrian Sutton. They were identified as having been made during the earlier Stone Age and were shaped as axe-heads.

Vines were imported from France. This was followed by the first wine being produced in South Africa in 1659.

Dutch establish a replenishment station in the Cape of Good Hope, and trade with indigenous Khoikhoi. They were brought Eastwards over the Hottentots-Holland Mountains and within a century, the area was named Swellendam. 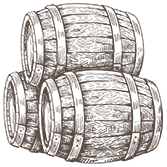 Land identified for the vineyard. The main criteria being virgin soil without previous chemical treatment.

…The art of winemaking starts with knowing you are just a humble part of a natural wonder.